The ChillMobile in Carrie’s Chronicles 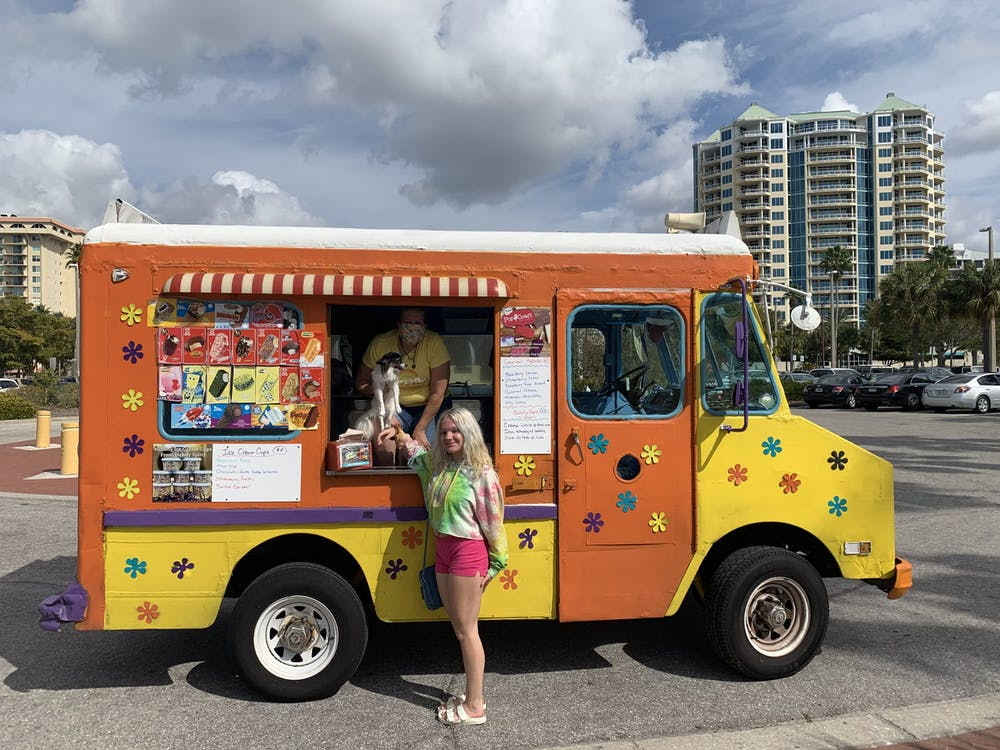 29 Jan The ChillMobile in Carrie’s Chronicles

Posted at 19:08h in ChillMobile in the News by TheChillMobile 0 Comments
0 Likes

Warm payoff from a chilly enterprise

Editor’s Note: (Who am I kidding? I don’t have an editor anymore. Anyway, this post is for those who’ve asked for more “feel good” stories.)

Some of you may recall a story I wrote back in September about an earnest city code enforcement official notifying Tammy Hauser that parking her ChillMobile ice cream truck in the driveway of her rented home off Boulevard of the Arts was a violation subject to a major fine.

Hauser had moved two weeks prior from Indian Beach, where she’d parked the truck in her driveway without issue since buying it in 2019 in order to be able to plug its freezer compartment into a compressor. She didn’t understand the new objection (which the city said came from an anonymous source) and protested to then City Manager Tom Barwin, who granted her a stay through the end of last year.

Now, with her Discover Sarasota trolley car tours back on line after a pandemic shutdown, Hauser plans to move the ChillMobile to her business site on 4th Street, so she can offer the tourists a cold treat before or after their tours.

But meanwhile, the colorful ChillMobile has been spending less time in the driveway and more time on the road — sometimes 8 to 10 hours a day, depending on engagements — spreading tinny music, frozen treats and jolts of nostalgia from Lakewood Ranch kiddie parties to Palmer Ranch senior centers.

And because she’d promised me a ride-along, Hauser texted recently to see if I’d like to join her for a birthday party gig in south Sarasota. Never one to refuse children or ice cream, I readily agreed.

When I arrived at her house, there was the ChillMobile in the driveway, hooked to a compressor that preps the panels of the truck’s cold plate freezer to remain at -5 degrees F for as long as 12 hours. Silence replaced the low key hum it emits (which Hauser says none of her neighbors object to) when she pulled the plug to prepare for our departure.

The ChillMobile’s mascot, her six-pound Papillon, Max, took up his accustomed spot beneath her feet and off we went, the freezers fully stocked with frozen novelties, from old-fashioned Good Humor bars to vegan popsicles and adults-only “boozy pops,” with a shot of alcohol. (Hauser was out of “puppy cups” — frozen peanut butter and squash treats for canines — after a recent “Yappy Hour” in the Meadows.)

At the height of the ice cream truck era in the 1950s, Good Humor had about 2,000 trucks on the road across the country. Today, Hauser belongs to a much more select group; she estimates there are less than 50 members of the nationwide Facebook group she belongs to for vendors. And one reason why is that its increasingly difficult to keep the original trucks in operation.

“Finding parts means scouring the Internet,” Hauser says. “Everything is grandfathered in on this truck.”

As we set out down the Trail, drawing stares and sporadic “screams for ice cream,” Hauser — a former nonprofits’ consultant who might have a third career as a stand up comedienne — regaled me with stories, any one of which might have been enough to make a lesser person abandon the enterprise:

Learning how to maneuver the 3-ton 1979 Chevy step box van (“There is not a thing on here that’s automatic”). Panicking when the engine blew in traffic (“That’s $1,000 of ice cream I stood to lose!”). Convincing a reluctant auto-repair shop to take on a total rebuild of the truck’s antiquated suspension and transmission (“At first they said, ‘Why are you even trying?’ But now it’s become the shop pet project”).

Hauser insists the disasters have been offset by the rewards, which have cemented her devotion to the truck (a “she”) and the enterprise. Her only fear these days is “the kids who just start running toward me before I’ve come to a stop.”

As we turn onto the street of our destination, Hauser pauses to start the familiar music (“The Entertainer”). With the first notes, kids playing in yards stream toward the truck as if pulled by a magnet. Hauser was here several months ago for the birthday of the older brother of today’s birthday boy, whom she remembers as a budding entrepreneur.

“He came up with his arms crossed and said, ‘Ma’am, can you tell me what’s your biggest seller?’” she says, laughing, “and when I said, ‘The Chipwich’ (vanilla ice cream between two chocolate chip cookies) he said, ‘And to what do you attribute that popularity?’”

Today, Bomb pops — oversized popsicles in patriotic stripes that leave all the children’s tongues and lips an unfortunate shade of blue — are the big seller. They are always popular with the elementary school set, Hauser says, but other favorites depend on the vintage of the purchaser. She can often predict a choice before its made.

“People want what they remember having when they were young,” she says. “For the older kids it’s Sponge Bob or Hello Kitty. Women like chocolate, like the Magnum — it’s the Lexus of ice cream. It’s interesting the number of Latino men who order Strawberry Shortcake. Creamsicles are for the Florida crowd. And for men over the age of 80, it’s always the Toasted Almond.”

Regardless of what they request, Hauser responds as if they’ve made a brilliant selection.

“Good choice, very creamy,” she says. Or, “You can’t go wrong with that. One of my favorites.”

Max, his front paws on the serving window, gets a lot of attention too. But the youngest member of this party isn’t interested in the dog or the ice cream. He’s too entranced with the ChillMobile itself. Hauser gives him a postcard with a picture of the truck on it.

She says this intrigue is not uncommon, even among older males. Driving home from a recent party in an unfamiliar neighborhood, she found herself at a stop sign surrounded by a group of tough-looking, gold-chain wearing young men. She had a moment of alarm before they started peppering her with questions about the vehicle.

We swing by the Bay front on our way home, looking for a little more business. It’s pretty dead, but eventually a stooped, white haired man steps haltingly up to the window and says, “I’ll have an ice cream bar.”

“I do have a plain, chocolate covered bar, but there’s also all of these,” Hauser says, pointing to pictures of the novelties on the side of the truck.

Something catches his eye.

“I’ll have a Toasted Almond,” he says decisively, as Hauser politely cheers his choice and I dissolve into a puddle of juvenile giggling.

“What’d I tell you?” Hauser says, as the man walks away.

We’re both laughing by the time we return home, where Hauser sends me off with a “healthy” Key Lime popsicle. I can empathize now when she says, if it weren’t for the pandemic shutting down her other business, she might not have realized the emotional gold mine she has in the ChillMobile.

“It’s given me so much I didn’t even know I needed,” she says. “I wish I could give this gift to everyone.”

The next day, my phone pinged with a text from Hauser. Under the words, “Guess who stopped by for a Toasted Almond?” there was this picture: