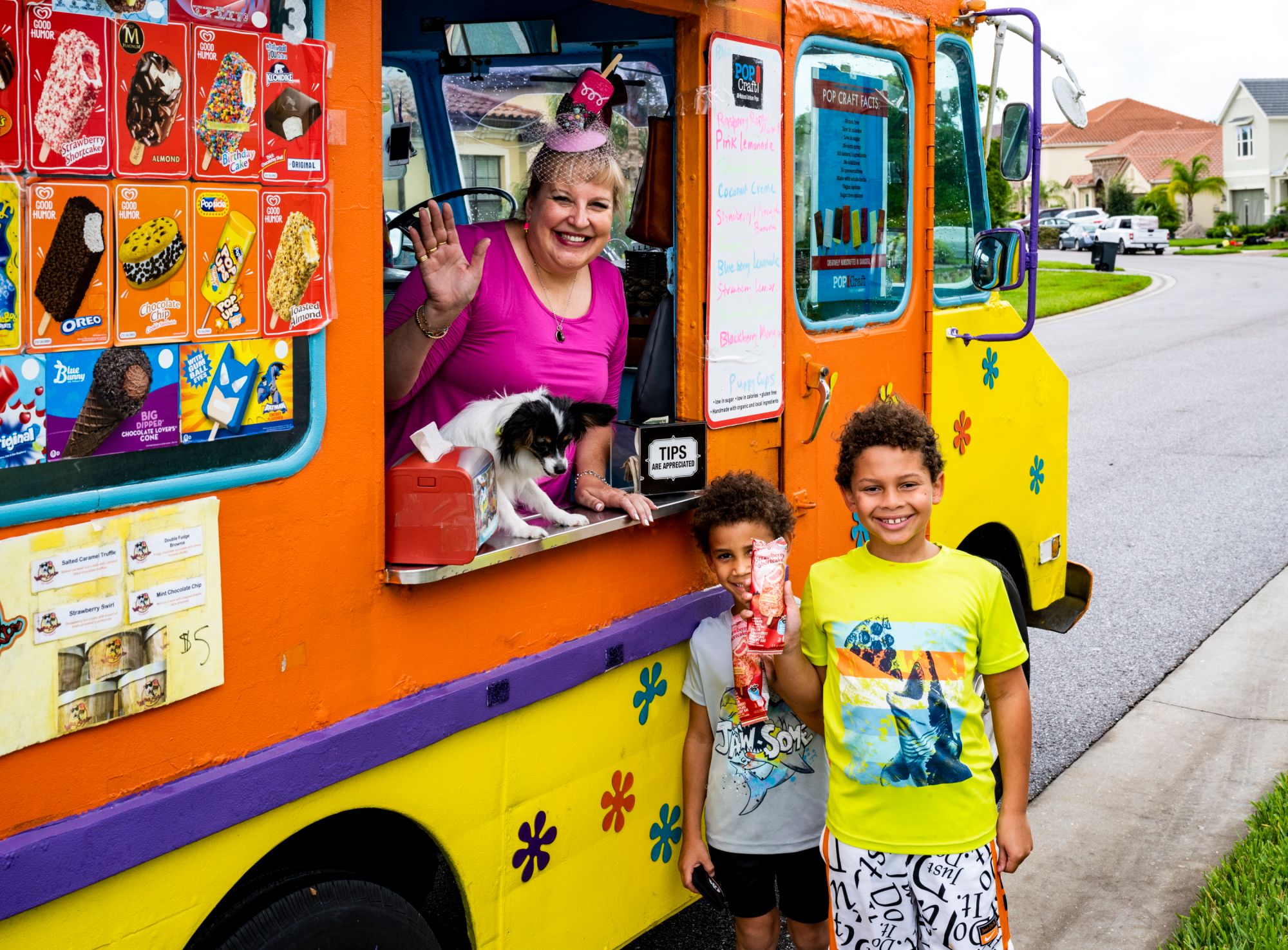 13 Sep The Chillmobile in Herald-Tribune

Posted at 22:25h in ChillMobile in the News by TheChillMobile 0 Comments
0 Likes

When pandemic restrictions brought her booming two-year-old guided trolley tour enterprise, Discover Sarasota Tours, to a screeching halt in March, Tammy Hauser pivoted to a side business exempt from the governor’s shutdown orders.

She took the vintage 1979 Good Humor ice cream truck she’d purchased in December to serve tour participants, painted it bright yellow and orange and rebranded it as “The ChillMobile.” Then she adopted a kid-friendly “Mrs. Rogers” type persona, appointed her dog, Max, as her mascot and started spreading frosty treats and warm sentiments throughout Sarasota and Bradenton.

“I had the truck, I needed to make money and it was all about bringing some joy, some fun to get us through this thing,” says Hauser, whose website, thechillmobile.com, drew bookings for birthday parties, senior housing facilities and more as soon as it went up in late March. “It was about trying to build community in those days when people were terrified to go out and kids were stuck at home.”

The ChillMobile not only helped her finances, it healed Hauser’s heart from the crushing disappointment of the curtailment of her trolley business. (The themed tours have only recently resumed, and at just one half-capacity trolley a week, rather than the 15 sold-out runs a week prior to the pandemic.)

“At this point, the ice cream business is keeping the tour business going,” she said.

Or at least it was until she moved, two weeks ago, to a rental home near Boulevard of the Arts and Orange Avenue in the Gillespie Park neighborhood, where she parks the ChillMobile in her driveway at night to keep the freezer units on a stable surface and so she can plug them in to the power in her garage.

Last week, Brandon Soriano, a code enforcement inspector with the city of Sarasota, stopped by and informed Hauser that the truck was in violation of a city code barring commercial vehicles from parking overnight on properties in residential neighborhoods. The statute defines violating vehicles as those that weigh more than 7,200 pounds, are taller than 6 ½ feet, or have more than two 4-foot square signs on display.

According to Hauser, the ChillMobile is approximately 10-by-12 feet (“about the size of the smallest U-Haul”), weighs about 6,000 pounds (largely due to the freezer units) and features stickers of Good Humor novelties on one side and the name of the truck on the other. Soriano told her that to comply with code, she would need to park the truck on an uneven grassy area to the side of the house and build an 8-foot wall to buffer the signs from view.

“This is completely ridiculous,” Hauser said. “I’m all in favor of protecting homeowners from bulldozers, I can appreciate that. But this statute is intended for large commercial vehicles, not little ice cream trucks.”

When Hauser asked Soriano if anyone had complained, he said they had not; he’d simply been driving by. She asked if she could place a cover over the truck at night. He said that would not be “code compliant.”

She noted the code had an exceptions clause for “emergency situations” – the city is currently under a public health state of emergency due to the pandemic – but Soriano said that only applied to “natural disasters,” like hurricanes.

Hauser noticed the statute had an exception for pest control vehicles; would people really rather look at cockroaches than ice cream bars, she wondered?

Soriano left a red “violation” tag on her door that said she needed to respond by Sept. 15 or risk a formal citation and fines. Hauser promptly filed an appeal.

According to City Manager Tom Barwin, code enforcement visited Hauser’s home “in response to an anonymous compliant,” and found the truck in noncompliance with the commercial vehicle statute.

“The vehicle owner has not been cited and no formal case has been initiated,” he said in an email statement provided by communication specialist Jason Bartolone on Friday. “Since this issue came to my attention, and in recognition of the unique circumstances and challenges during the pandemic, I have granted the owner a 30-day grace period to come into compliance.”

None of this makes any sense to Hauser, since the same truck has been parked in residential driveways – her own in Indian Beach and the previous owner’s, near 10th Street and Lime, both within the city limits – for the past nine years without issue.

“Why in God’s name would the city be going after small businesses for stupid things during a pandemic?” Hauser said. “They should be doing everything in their power to support us so that we are viable to pay taxes and bring in revenues.”

“In my mind, this is so against being a good neighbor. The whole idea of The ChillMobile was to build community. People have seen how positive the truck is and how responsive people are, they know the charm. This is so short-sighted and insensitive.”

While she gives Soriano points for being “very diligent,” she can’t fathom how something meant to spread “Good Humor” could turn so sour.

“Maybe he just doesn’t like ice cream,” she laughed. “If so, he’s the first person I ever met who didn’t.”