The ChillMobile on 10 Tampa Bay 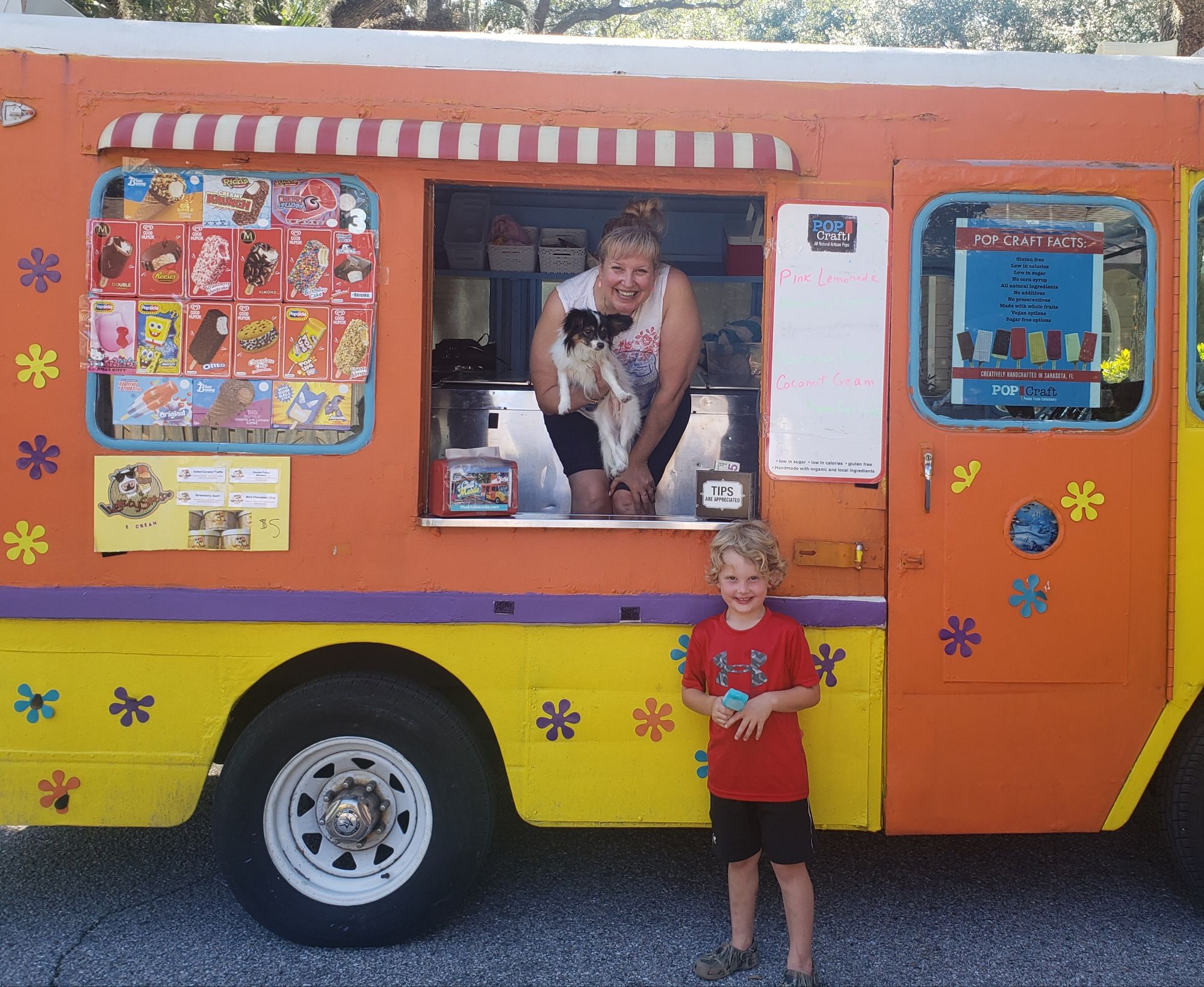 29 May The ChillMobile on 10 Tampa Bay

Posted at 13:45h in ChillMobile in the News by TheChillMobile 0 Comments
0 Likes

While most businesses struggle during the pandemic, old-fashioned ice cream trucks are thriving

SARASOTA COUNTY, Fla. — Tammy Hauser says business has been moving with this ice cream truck. But, if you knew Hauser a few months ago, you wouldn’t have found her serving ice cream.

She runs Discover Sarasota Trolley Tours. She opened the business in 2018 in downtown Sarasota. For her, business was going great.

“We were running about 12 to 14 different trolley tours every week,” Hauser said. “They were sold out! We had waiting lists for January, February, and March.”

But then the coronavirus happened, and the governor shut down the state. In turn, that shut her down.

Hauser was just seeing the end of paying back her startup costs for Discover Sarasota. And because of the nature of work, she didn’t qualify for the loan programs for businesses.

“All of the programs that were offered for business funding, we don’t qualify because they all begin with a premise of two or more employees and I have independent contractors as tour guides,” Hauser said.

With trolley tours sold out, but not tour to go on, Hauser had to go out and find another way to make money in order to refund thousands of dollars in pre-booked tickets.

While browsing Facebook Marketplace she stumbled upon an opportunity to make some money. It was an old fashion ice cream truck.

To her surprise, business is booming! She says she’s grateful for the ice cream truck, that she now calls “The Chill Mobile.” Hauser says it was a wonderful turn of events, but completely unanticipated.

“Suddenly we were in full gear! I had to build the website, develop a Facebook page, figure out really the business of ice cream,” Hauser said. “It’s a completely different business driving a truck and managing inventory.”

It wasn’t easy; but in no time, she had her ice cream truck on the road, driving through neighborhoods.

“I started getting calls from neighborhoods because I had put out this pandemic special; $20 for a neighborhood visit, and moms jumped onto that right away!”

She never knew how high the demand was during this time of COVID-19.

“When I would go visit the neighborhood there would literally be hundreds of families in their driveways,” Hauser said. “I would go driveway to driveway or I would be at a community pool or center area and they would come one by one.”

That first neighborhood visit is what jump started her busy schedule. Now, everybody’s waiting for The Chill Mobile to make a stop at their house.

“Those neighbors told other neighborhoods, and it got to the point where I’m probably doing 40 to 50 neighborhoods a week now, and that’s not even corporate events those are regular weekly neighborhood visits,” Hauser said.

In a matter of months, and a switch in jobs, her clientele was changing.

“Our tours, it’s really for adults and so our average tourgoer is in their 60s,” Hauser said. “The families that are booking me have little kids and it’s been wonderful for me to meet so many families here in Sarasota and Bradenton and down in Venice, but they were not my clientele before.”

For more seasoned ice cream truck drivers, the rise in business is no surprise. People are stuck at home, or too scared to go to an ice cream store out of fear of exposure to the virus.

And there’s just something about the sound of an ice cream truck coming your way that makes you smile and brings you back to simpler times.

“You’re stuck at home, it’s something safe and something fun and entertaining to look forward to,” Hauser said.

Hauser says she’s even had corporate companies hiring her to come by their business to lift the spirits of their employees.

She says she’s doing what she can to make sure her customers feel safe about their purchase too.

“The nature of the truck first of all is I am inside. To get to the window from where I stand and an arm’s length out, it’s over 6 feet even getting to anybody,” Hauser said. “Number two, if people are uncomfortable with me handing [them the ice cream], I can put it right on the counter which is always kept clean, stainless steel and they can pick it up.”

Everything is prepackaged, so there’s no handling of the ice cream directly, making it safer from cross contamination.

“We are a commissary truck which means I can only sell prepackaged,” Hauser said.

She gets weekly deliveries from her vendor. But, because of the uptick in ice cream sales, stocking the trucks has become difficult.

“The demand is just intense and some of the factories cannot produce the products to the level of demand,” Hauser said.

She says she had many ice cream bars that she’s on a waiting list for.

“Simple ice cream products that you would think what? But they are hard to come by,” Hauser said. “Either factories aren’t producing as much or the demand for what is being produced has just really skyrocketed in the same way toilet paper has.”

Hauser says, she’s restocking her truck as soon as items come in, to keep her neighborhoods happy.

“It’s the only thing I can do,” Hauser said. “I’m in the world of entertainment. Until the ban is lifted where I can run at full capacity, I cannot legally run my tours.”

“The truck has been in the shop; I did blow out my engine because we were driving so much,” Hauser said.

She says the truck should be fixed and back on the road next week. Hauser says she feels truly blessed and says The Chill Mobile is what’s kept her going through this pandemic.

“It has allowed me to continue to keep our trolley cottage closed, to be able to continue paying operating costs on that side of the business and supporting myself,” Hauser said. “The Chill Mobile has been a lifesaver financially and also psychically.”

Hauser says the opportunity to get outside in her ice cream truck, continue to entertain and continue to have social connections with people has been healing.

“It has touched me in so many ways,” Hauser said. “It has let me focus outside on something proactive, instead of internally on what I can’t do.”

“It’s something that was a gift I could give to families here in Sarasota and that really has healed me in so many ways.”